We Need to Do Better on Seclusion and Restraint in Our Schools: Why I Support SB 527 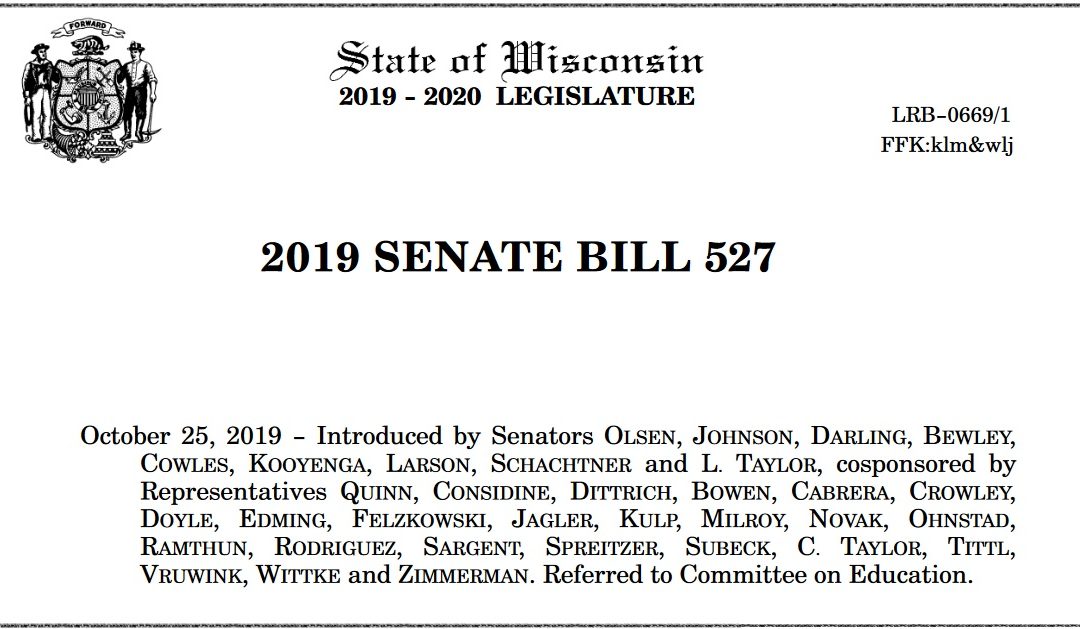 Everyone in Wisconsin wants our children to be happy, healthy, and successful. To get there, we need to do better when it comes to seclusion and restraint in our schools. SB 527, a new bill introduced at the Capitol in Madison on October 25, will help us reach that goal.  (See the text of the bill here, and more information from Wisconsin Family Ties here.)

It’s so crucial for parents to share the stories of their children when they are not able to share for themselves, either because of disability or age. I share my son’s story in the hopes that this will help change happen for him and the other children that experience seclusion and restraint.

My son is in third grade and has ADHD, autism, sensory processing disorder, and vestibular issues. He has an IEP, and there are many things about school that are challenging for him.

My son’s experience with seclusion and restraint began in kindergarten, and continued in first and second grade. He has already been secluded over 20 times and restrained over 27 times by the end of 2nd grade.

I didn’t learn till my son was in 2nd grade that schools were supposed to keep incident reports of each seclusion or restraint.  I only found out when I asked due to injuries my son had sustained during restraint!  They were supposed to tell me that a report was available, but they never did.  Unfortunately, now that I ask for the forms every time (and went back and did an open records request to get all the ones I didn’t have), I’ve found restraints happening repeatedly on and off for an hour!

My son has been restrained and secluded for incidents that did not come close to meeting the standard in Wisconsin law of “clear, present, and imminent risk” to physical safety. These incidents included things like running around the room, kicking off shoes, throwing crayons, tearing up papers, and using inappropriate language.  Why would we hold a child down for having a sensory episode?

I keep advocating for my son when it comes to restraint and seclusion because I worry about what this is doing to him in the long term.  I used to manage multiple group homes, and I could tell when a resident had been secluded or restrained. I noticed a pattern with the clients that sought out negative attention by hitting, spitting, biting, punching, and kicking that they had been restrained throughout their lives prior to coming to the group home.

SB 527 would make a lot of improvements to our state’s law on seclusion and restraint in school.  And by improving the law, it would help improve the lives of many children with disabilities and their families, since most of the seclusions and restraints involve students with IEPs. I want to talk about two of the improvements in particular.

One thing the bill would do is to require districts to report seclusion and restraint data to DPI, rather than just to the school boards.  Parents need to know what is going on in their district.  And DPI needs to know about the data from each district because they could provide critical support to districts where the numbers seem high or have jumped up.  Data helps track the trends and can show if training and support is needed.

Another helpful change is that schools would have to automatically send the incident reports to the families, rather than just having to tell them it exists (which is a step that gets lost too often). Parents need to see the report and details to determine how best to support our children in order to be equal participants. These reports are also critical to have in the event of injury such as scratches, bruises, cuts, etc., which has happened too many times to my child.

I believe that everyone’s goal is to do what’s best for our children as they grow.  This bill will help us get to that goal, and I hope you’ll join me in letting your legislators know to support it!